Hit enter to search or ESC to close

Tim Gill the writer, consultant and independent researcher is a global expert and advocate for child-friendly urban planning and a balanced approach to risk in children’s play and learning. As founder of Rethinking Childhood and author of No Fear: Growing up in a risk averse society, he conducts research and advises cities around the world on how to create child friendly urban environments.

The key is to reduce the impact of cars – parked and moving – in residential neighbourhoods. Once this is done, all sorts of other good things – more space for play, better walking and cycling networks, safer, more welcoming streets – can follow. Without it, children’s play will always be squeezed into left-over spaces, and parents will feel nervous about even allowing their kids outside on their own.

Do you think the global Covid-19 pandemic changes the picture around child-friendly cities?

The outbreak is putting immense strain on families around the world. The consequences could be literally lethal in low income urban contexts, where collapsing incomes, food shortages, a lack of social safety nets and patchy health provision could leave millions of children destitute. Looking at the UK and Europe, one thing that is already clear from the national lockdowns is the immense value of outdoor play and public open space – and especially green space – to families and communities. I also think that a period of hyper-local living, with streets almost free of traffic, may strengthen the case for more sustainable ways of working, consuming and getting around once the restrictions begin to be lifted. It’s a small silver lining, but worth holding onto.

With almost half the world’s children now living in urban areas, how would you rate or describe the current state of child friendly city design globally, and at what stage of the process do you think we are in?

We may be on the cusp of a new dawn. Growing numbers of city leaders are following the path marked out by pioneers like former Bogotá mayor Enrique Penalosa (whose maxim that children are an indicator species is now common parlance in urbanistic circles). The Bernard van Leer Foundation, a client of mine, deserves singling out for its ambitious, smart Urban95 initiative (which invites us to see cities from 95cm: the average height of a 3-year-old). But while I’m optimistic, it will be a very long process, with so many cities still growing in car-centred (or worse yet, unplanned) ways, especially in the global South where the vast majority of urbanisation is happening.

Throughout your career you have conducted research in cities across the world focused on child friendly design and interventions; which cities and countries do you see as truly putting children at the front of their current and future development? And why?

The obvious candidates are the cities that urbanists love to celebrate, like Freiburg, Copenhagen and Odense (which have long prioritised walking, cycling and playable public space). Ghent (whose long-term child-friendly strategy has reached into all parts of the city) and Rotterdam (which has invested millions in turning some of its car-dominated neighbourhoods around) are also up there. But I’m also impressed by cities like Tirana and Recife. These are cities that face huge challenges, and their mayors have made child-friendly urban planning central to their mission and narrative about turning their cities around.

Your book ‘No Fear’ and other publications focus on the need to expand the horizons of childhood and create a more balanced approach to risk in childhood and the benefits of doing so. As a built environment expert for the Design Council CABE, how do you think we should designing our cities to create less risk averse societies?

The culture of municipal and organisational risk aversion needs to be challenged head-on. When it comes to children, this means making visible the good things that happen when children are given a degree of freedom and a taste of adventure, whether in their local playground or when getting around their neighbourhood. Unreasonable demands from anxious, vocal parents (who in truth are a small minority) need a robust, principled response. Of
course, where there is a duty of care, we also need to tackle the dangers. That’s why I’m a champion of risk benefit assessment as a practical tool that supports a balanced, thoughtful approach. As one municipal officer told me: “conventional risk assessment tells us what we cannot do; risk benefit assessment tells us what we can!”

Speaking to governments and city authorities the world over, what policies and strategies would you recommend are implemented to make towns and cities more child friendly?

My advice would be to start with people, not policies. All the cities that have made real progress have done so by finding, resourcing and supporting capable, well-placed officials who can work effectively with the departments whose work shapes children’s environments: highways, housing, planning, parks. Of course, it’s even more effective if their work is backed up by strong political leadership. An opportunistic approach is also crucial. The initiatives with the greatest impact have been where a programme in the pipeline – be it urban regeneration, a new masterplanned development, a new park or some highway engineering works – has been steered and tweaked to address the needs and concerns of children and caregivers. The policies can come later, once it’s clear what works.

In addition, what examples of interventions at the street level do you consider as having the biggest impact on children?

Taming car traffic is almost a silver bullet. I’ve heard so many stories from around the world about how children spill out into residential streets that have been closed for road works, for example. Road closures, permeable filters, reconfiguring parking, and radical traffic calming (not simply a few road humps but a serious make-over that opens up roadspace and a creates more welcoming streetscape) are all high-impact interventions. It this is all a step too far, or too expensive in the short term, then consider temporary interventions like the regular resident-led road closure sessions promoted by the Bristol-based Playing Out campaign. There is no reason why these simple, almost zero cost, high-impact initiatives should not be happening in every local authority area (and recent Government guidance makes them even easier in the UK). 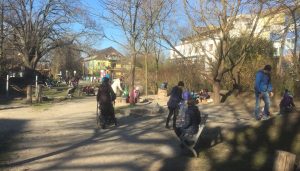 If we ask ourselves what a child-friendly neighbourhood looks like, it’s clear that it looks a lot like a sustainable  neighbourhood: compact, green, easy to get around on foot or by bike. Anyone who visits truly sustainable neighbourhoods like Vauban in Freiburg will see this. It is one of the most powerful arguments in favour of child friendly planning and design: it helps to build the case for the changes we all know cities will have to make in response to the climate crisis, toxic air pollution and environmental degradation.

Many people argue that if we create child friendly cities then they will also be friendly to all age groups. What is your take on this argument and what examples are there of where these holistic benefits have been achieved?

It’s largely true, and is at heart a matter of progressive urban planning and design. In Tirana, it literally transpired: the residential playgrounds refurbished by the city were taken up enthusiastically by grandparents, and are now places of spontaneous inter-generational contact. There may be some differences at the level of detail – for instance in the design of facilities in public space. But these should not distract us from the big picture: we need to stop building cities as if every citizen were 30 years old and athletic. That’s a quote from Gil Peñalosa: Enrique’s brother, former Bogotá Parks Director and founder of the NGO 880 Cities, whose name invites us to see cities from the point of view of an 8 year old and an 80 year old.

Richard Lambert, Coordinator of Liveable Ciiies Prorgam. He has been working for 10 years creating sustainable urban communities in London, UK and Internationally. Specialising in the development of urban green infrastructure and pedestrian walking related improvement projects, policies and strategies.