Barcelona’s Superblocks (Superille in Catalan) became a part of global best practices for two significant reasons–a) Prioritising people over cars with a focus on accessibility, and b) following community participation rulebook. ‘Superblocks’ are 400 x 400 m units–bigger than a block, yet small than a whole neighbourhood. Through the said urban design concept, the city aims to recover space for the community, improve biodiversity, move towards sustainable mobility, and encourage social cohesion.

Barcelona introduced the Superilles–a government-funded project identifying 120 intersections to be converted, in the 2013-2018 Urban Mobility Plan of Barcelona. The motive was to reduce vehicular pollution and move towards sustainable mobility. As a result, the council is now looking at transforming one in three streets in L’Eixample district- the part of the city designed by Cerdà. Beginning in 2022, moving from east to west, the urban designers want to remodel 21 streets by 2030. The 2024 Urban Mobility Plan only fuels the city’s vision of creating 503 superblocks throughout the city in the future.

Cities around the world are taking inspiration from Barcelona’s ‘Superblock’ concept. The clusters of inner-minor streets called green streets in the superblocks are closed to through traffic. Vehicles are allowed primarily for accessing residences, public transport, disabled people, emergency vehicles, and bicycles used for recreation only. Cyclists using bicycles as the primary mode of transport are likely to move faster. Hence, they will have to abide by a speed limit. The limit is the same as for hand scooters and other vehicles of 10km/hr within the superblock. Further, motorised vehicular movement is in only one direction. The roads thus become public spaces that are open and safe for use by pedestrians for varying purposes. 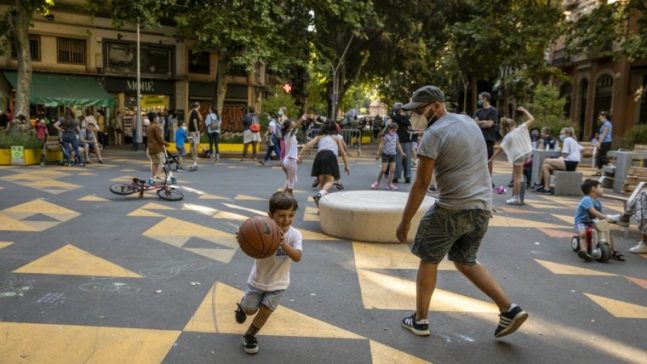 The Superblock concept emerged in Barcelona city planning repeatedly but was not turned into an urban design initiative until now. Architects Josep Lluís Sert and Le Corbusier in Barcelona’s Plan Macià, 1932, included 400x400m modules. In 1958, architect Oriol Bohigas suggested joining nine blocks in the urban fabric of L’Eixample to adapt modern mobility concepts. Later, under the Ecosystem Urbanism model, the Barcelona Agency of Urban Ecology followed through to create the Superblocks.

Barcelona introduced its first superblock in 1993 near the Basilica de Santa Maria del Mar in the historical neighbourhood of El Born. In 2005, two more superblocks in Gràcia were planned. Pilot projects started in 2014 and increased pedestrian trips by 10%, accounting for 2,01,843 trips annually. The trips by cyclist went up by 30% as well. Since 2016, Barcelona has worked on implementing six fully functional superblocks in the city. Stakeholders involved in the ‘open project’, as they call it, varied from residents, city council, private companies, district organisations, non-governmental organisations, universities, and expert institutions.

Movement through a superblock explained.
Image Source: Superblocks: How Barcelona is taking city streets back from cars – Video by Vox on youtube

The idea may sound perfect, but the journey was not so smooth. Major pushback from the selected superblock neighbourhoods, especially the local shop owners, was experienced during the pilot run. The same may happen during the Superille rollout in L’Eixample because of the immensity of space in the discussion. The argument was that restricted car movement would affect business, and their customer base will fall drastically. The city council counter-argued how, at present, only 5% of customers access the commercial premises on L’Eixample by car. The available off-street parking areas can cater to the increased demand in the future. Furthermore, there is an inclusion of goods vehicles and individual cars’ movement in the design of the green streets for loading and unloading goods. 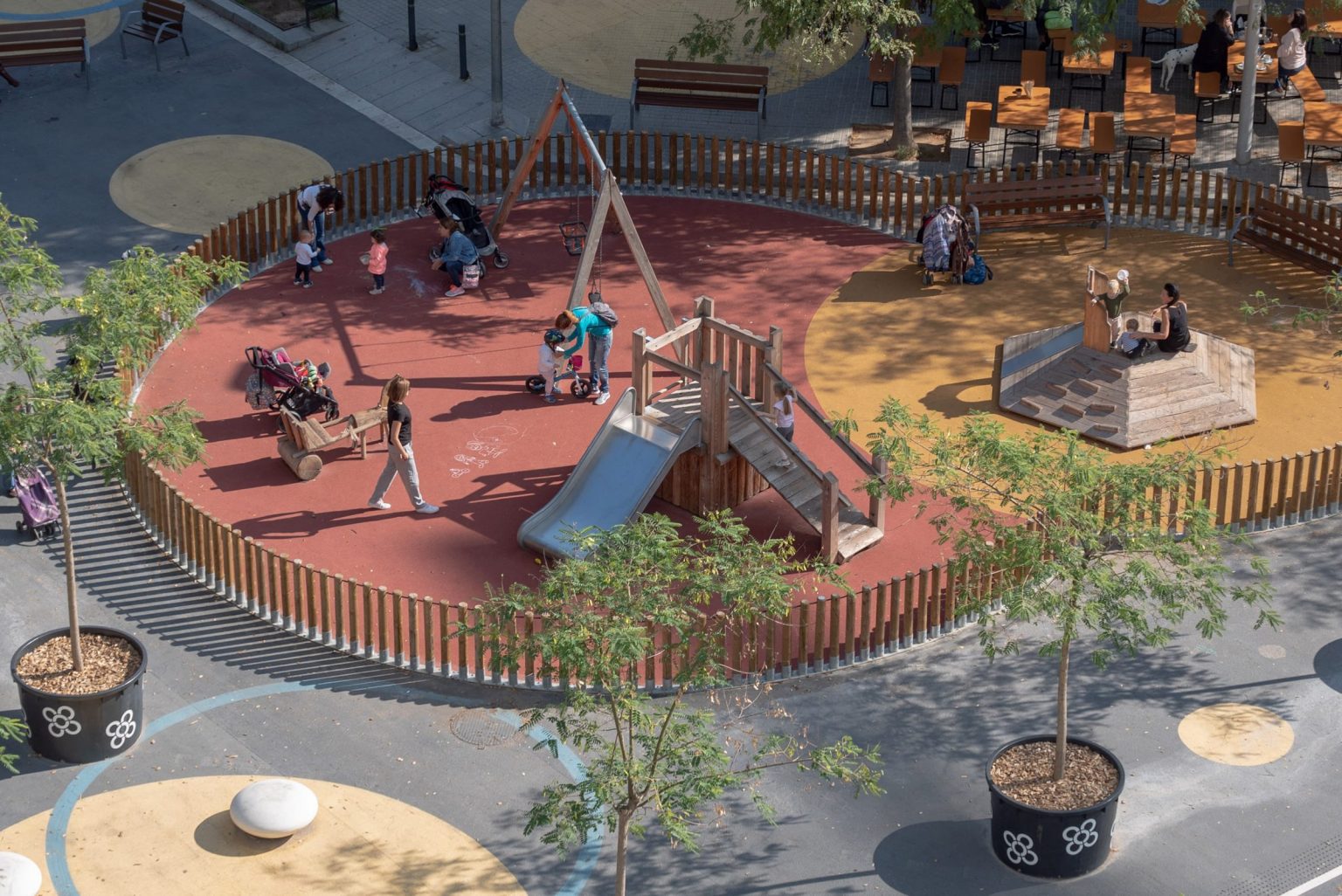 Public space in a Superblock.
Photo by: Anna Beltri

They also faced community resistance due to concerns regarding gentrification, rising property values, and residents’ displacement.  People worried it would slowly push the current residents out after their leases expire. Two arguments make way here. First, the council introduced the pilot runs in areas with social housing, which means the government was careful not to fuel the discrimination amongst rich and poor neighbourhoods. Second, the identified 120 interactions spread across the city clearly shows their purpose is to have more space for people and less for cars throughout the metropolis. The city council claims to be thoughtful of the green and open public spaces on the real estate market. Thus, aim at fostering equality and avoid concentrations and localisation amongst areas and between neighbourhoods.

‘Superblocks’ initiative goes hand in hand with redefining mobility. The 2024 Urban Mobility Plan focuses on transforming the mobility patterns in Barcelona. The aim is to reduce private vehicles journeys from 26.04% to 18.48%. Another target is to have 81.54% of all journeys on foot, bicycle, and public transport journeys by 2024. The council listed 300 specific measures for the coming years, including but not limited to adding 32km pedestrian-only streets, expanding bike network by 40%, adding 30km/hr lane on roads with three or more lanes, etc.

Considering the shrunk road capacity for cars, the municipality expects a shift to public transport. Hence, it is also adding 67km of bus lanes, increasing the efficiency of the system and reviewing demand specific routes. Salvador Rueda and his team designed an orthogonal bus network that aligns with the superblock traffic diversion. The bus network is currently under implementation. The number of bus routes will go from 94 to 28 while increasing the system’s efficiency. The waiting time will be about five minutes, and a one-direction-trip time in the city will be approximately 35 minutes across the city.

Simultaneously, a metro system improvement strategy is also in the pipeline. At the same time, schemes such as park-and-ride, book-and-ride buses, and public-taxi applications are also under development. The ‘Green axes’ for the Superblock project are meant to connect green areas, transit stops, and commercial activities. Although cars and motorbikes can access these plazas, they cannot cross the junction. The plazas or squares formed at junctions of intersecting green streets will become locations for socialising, leisure activities, play areas, etc.

A Design for All

The city rolled out the pilot projects in six neighbourhoods with adequate intervals to better refine the public participation process. The goal is to encourage social cohesion and collaboration. For example, under Phase 2 of the ‘Superilles’ project, new practices such as green roofs, water harvesting, rainwater management, and tree plantings are significant. Concurrently, they are also considering new flexible uses for terrace space and a usage plan to safeguard against an excess concentration of similar establishments. In addition, it would give room for diverse and multipurpose uses. Also, fewer vehicles and more people on the lanes would ultimately attract attention towards local business and increase potential retail success.

Even the European investment bank (EIB) is to finance 40 projects in Barcelona to support climate change mitigation and adaptations. The promised amount to promote urban regeneration 95 million euros. Up to 23% of the total EU bank funding will regenerate 2,00,000 m2 across the city under the superblock project. Concurrently, a study carried out by ISGlobal (Barcelona Institute for Global Health) implied a fall in private vehicles by 2,30,000 a week as people switch to public transport, bicycle or walking because of the 503 envisaged superblocks.

Green and civic spaces often affect real estate values, and Barcelona has a name amongst the international housing market. However, the Superilles are to spread all across the Cerdà Grid. Altogether, the chances of real estate property values going high in one neighbourhood are a sceptic but uncertain one. If the government puts policy in place that keeps the green zones affordable and prevents them from turning into wealthy enclaves, the plan benefits all.

La Pinya, in a 2018 article, mentioned that the city had only 0.6% of green spaces. The Barcelona City Council in 2019 suggested the number of communal space under green parks and gardens went up to 11%. The Superille project is likely to increase the number substantially as Barcelona revitalises its streets and public spaces.

The revitalisation is not limited to additional space allocated for leisure activities but also considers major design elements, including curbless paving to improve accessibility for all, rigid and tenji blocks for those with visual impairment, obstacles to demarcate a pedestrian zone outside building facades. Obstacles to restrict access by vehicles within the superblock will include spike strips and boom barriers. Further, guidelines for street design have primary requirements of at least 20% of surfacing to be permeable. Simultaneously, 80% of the street should have tree cover and shade for summers. Other pivotal actions include eliminating parking areas from pavements, monitoring bike lanes, accessible lifts, and escalators in public spaces.

Barcelona’s Citizen Commitment for Sustainability 2012-2022 plan focuses specifically on small-scale interventions and people participation. Rethinking and regenerating the city neighbourhoods was at the root of introducing the superblock concept. Under the Programme for Promoting Urban Green Infrastructures, the council is looking to increase the green area in the metropolis up to 1m2 per habitant, which account for 165 ha of land conversion into small parks and public squares by 2030.

Regardless, keeping people at the centre of all decisions is applaudable. Instantly the vision seems grand but promising. Barcelona is turning into a giant superblock, and the world is rooting for it!