Uniting the city and Biodiversity

Cities have historically been established and developed in or near ecosystems that provide abundant aid to urban societies, including water, rich soils and protection from extreme weather events. This natural layer underpinning the built environment has been increasingly degraded through urbanisation’s direct and indirect impacts.

The most noticeable direct impact of urban growth on biodiversity is the loss of natural habitats. The rapid expansion of the global built environment – a 66% area increase in the first 12 years of the 21st century has significantly impacted natural ecosystems. Much of the land in and around cities is violated, threatening native habitats, the genetic and functional diversity of flora and fauna, and the quality of air and waterways. A high proportion of the direct impact on nature from this urban expansion is forecasted to occur in some of the most biodiverse and environmentally-intact regions in Africa, Asia and the Americas. Of the 423 cities located in the world’s biological hotspots, 383(90%) are projected to grow and expand into tropical moist forest biomes, predominantly in low- and middle-income countries.

The difference between population growth and spatial growth is more when we look at developing countries, where the population increased 2.3 times and the area increased 3.2 times in the same period. To feed the world’s cities, we require an area 36 times larger than cities’ global urban footprint. This leads to natural habitat destruction and biodiversity loss as we extract resources and create space to extract materials and produce food. The scale of this indirect impact varies locally, regionally and globally.

Recent natural calamities, such as the Australian “Black Summer” of 2019-2020, have evidenced the deep link between climate change and nature loss. During the event, an area of the size of Cambodia was ravaged by extreme fires, killing or displacing nearly three billion terrestrial vertebrates and driving endangered species to extinction.

Cities’ direct and indirect impacts on biodiversity have negative cascading effects threatening ecosystem stability at local, regional and planetary scales. The complex interactions and feedback loops between climate, biodiversity and human activities produce pronounced and unpredictable outcomes. Therefore, climate and nature-related risks should be regarded as factors that deepen the major constraints for future urban growth.

Accounting for all potential disruptions to economic activities, 44% of GDP ($31 trillion) in cities is currently estimated to be at risk from biodiversity and nature loss. On the one hand, this is lower than the global average (50% of GDP) due to cities hosting fewer primary activities relying on nature (i.e., agriculture and mining). On the other hand, multiple downstream sectors with activities concentrated in cities (i.e., transport, utilities and retail) are severely affected by disruptions to their supply of inputs. 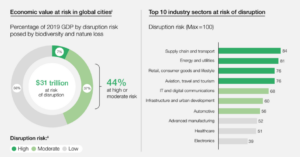 Strengthening the resilience of global urban centers is a matter of urgency for humanity, the economy and the Earth’s stability. Cities are the centers of innovation and offer enormous opportunities to reimagine a future where humans and other species can thrive. Building the cities partnering with nature will be the best possible way.

Reviving the cities through spatial re-integration and investing in innovative nature-based infrastructure and services, cities can both improve the lives of their citizens and build resilience against natural hazards and nature-related risks while addressing the twin challenges of climate change and biodiversity loss.

Cities can be seen to have three interdependent “layers” –

Each layer has an important role to play in sustaining the urban realm. Nature provides critical ecosystem services; the built environment supports key needs such as housing and transport, and societies build and distribute wealth and prosperity. But these layers currently have an unbalanced relationship in cities around the world. Social institutions, technologies and the built environment are increasingly degrading nature and pushing it out of urban spaces.

It is critical that a fully functioning natural layer underpins our cities. This requires deeper spatial (re)integration of natural ecosystems in city planning and new development projects supported by business models and interventions able to restore and utilise natural ecosystems.

Three key actions have been identified as levers for achieving spatial (re)integration of nature in cities:

Singapore has led the charge in uniting city and biodiversity, and successfully developed a comprehensive plan to become a “City in nature“. The city plans to add 300 more hectares of parks and gardens by 2026, develop recovery plans for 100 species of plants and 60 species of animals, and have each household within walking distance of a park. In 2008, Singapore launched the Singapore index on cities’ biodiversity, providing cities with tools and metrics to ensure biodiversity conservation. A new report published in September 2021 combines suggestions by experts and cities using the Singapore Index framework for ways to restore habitat, promote urban agriculture and nature-based solutions for infrastructure. 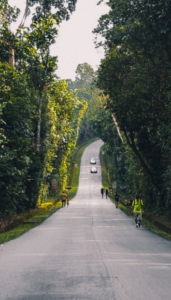 Nature based solution – Singapore has developed a system of roads called “Nature Ways” that feature native trees and shrubs. Singapore’s National Parks Board has drawn key lessons from native tropical forests to successfully incorporate a diverse range of species alongside verges. By emulating the multiple layers of the forest ecosystem in multi-tiered tree planting systems, the Nature Ways mimic the structure of the rainforest. They create vibrant, natural niches for small mammals, birds, reptiles, amphibians and insects, providing ecological connectivity between green spaces across the city. A denser tree canopy helps to reduce ambient temperatures and curtail the urban heat island effect, as well as absorbing carbon and air pollution, retaining soil moisture and intercepting heavy rainfall, thereby lowering flood risk. The Nature Ways also improve the travel experience across the island for commuters, pedestrians and cyclists.

By understanding the need to revive cities’ layers and bringing nature based infrastructures as seen in Singapore, we can know the strategy required to unite city and biodiversity. Several actors must work together to stop biodiversity loss, ranging from scientists, urban planners, and architects, all of whom want to make cities thriving habitats for multiple species.

The above article is based on :  BiodiverCities by 2030/World economic forum